When it comes to tattoos, there is no shortage of designs to choose from. However, if you are looking for a unique and eye-catching tattoo, the 8 ball may be the perfect option for you! This article will provide you with all the information you need to make an informed decision about getting an 8 ball tattoo. We will cover everything from meaning and symbolism to aftercare instructions. So whether you are considering getting a tattoo for the first time or are just curious about 8 ball tattoos, read on for all the details!

The eight ball tattoo is one of the most popular tattoo designs in the world. It is a simple and elegant design that can be adapted to suit any style. The eight ball tattoo has its origins in American culture and it is often associated with luck, fortune, and change. Originally, 8 ball was a numbered ball in a game of pool, but it has since become much more. [1] 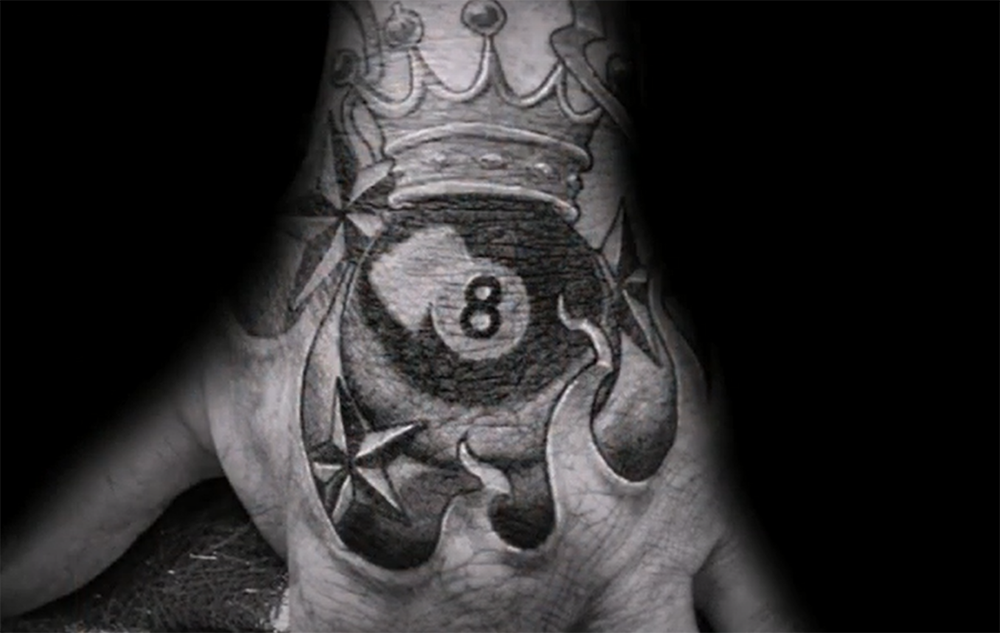 But there are a number of different interpretations of the eight ball tattoo meaning. Let’s take a closer look at them.

What Does an 8 Ball Symbol Mean in General?

The eight ball tattoo can also be interpreted as a reminder to stay positive and keep your head up no matter what life throws at you.

It may seem like a contradiction, but the eight ball is also often seen as a symbol of bad luck. This is because it is the last ball that you need to pot in a game of pool. Picking up the black eight ball when you are already ahead in the game can be seen as tempting fate. and it can often lead to disaster.

Eight ball tattoo also has its presence in prison culture, and it has a number of different meanings. It can be a symbol of power and authority. In some cases, it can also be used as a warning to other inmates not to mess with the person who has the tattoo.

In gang culture, the eight ball tattoo often represents drug dealing and crime. It can also be seen as a sign of disrespect for the law.

Eight ball tattoos also may represent that the person has made some bad choices in life and is currently paying the price for them.

The most common interpretation of the eight ball tattoo however, is that it represents chance. As we mentioned already, the eight ball is the last ball to be sunk in a game of pool, and so it can represent both success and failure. If you are looking for a tattoo to represent your love of gambling or your hope for good luck, then this is the perfect design for you.

It can also be seen as a symbol of change. This is because the eight ball is often used as a means of making decisions. When you flip a coin, it lands on either heads or tails. But when you roll an eight ball, it can land on any number of different outcomes. This makes it a perfect symbol for those who are looking for change in their lives. Because of that reason, it can also represent the future, as it is unknown what will happen next. [1], [2], [3], [4], [5], [6]

So, in general, an eight ball tattoo can mean many different things depending on who is wearing it and what their personal experiences are.

What Other Symbols Are Included in 8 Ball Tattoo?

Eight ball tattoos often include various imagery to make the design look more complex. The meaning of an eight ball tattoo can be interpreted in different ways, often based on the other imagery included in the design. Let’s take a look into some of the most popular options. 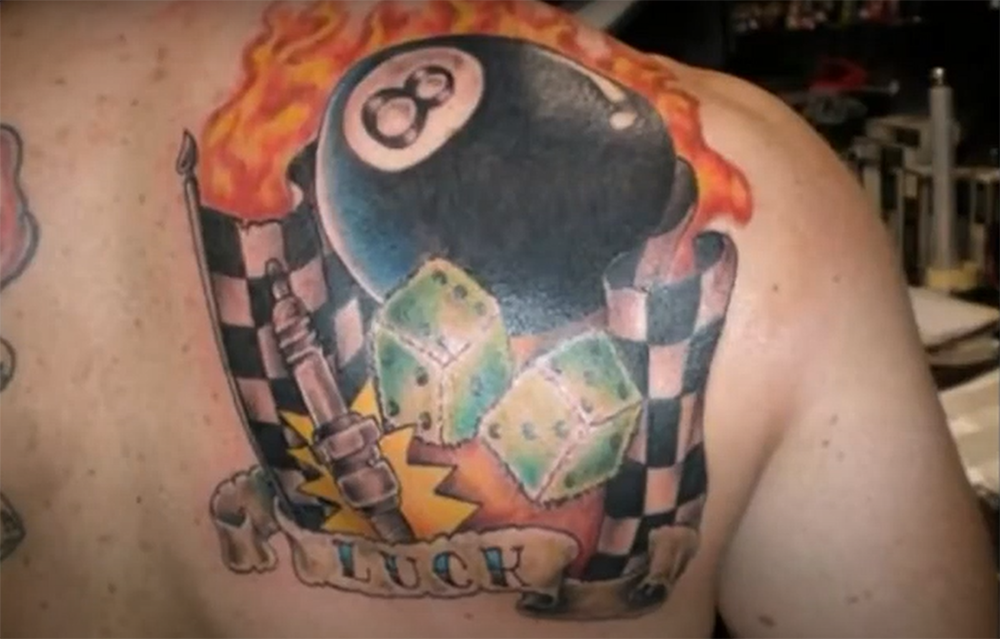 Since 8 balls indicate luck, no wonder you will often see lucky symbols paired together with them. The most common include playing cards, four-leaf clovers and horseshoes. All of these together make for a very lucky tattoo!

Another popular way to make an eight ball tattoo is to include some flashy symbols. These can be things that add more personality to your design.

For example, some people might get an eight ball tattoo with a snake wrapped around it. In this case, the snake could represent temptation or danger, while the eight ball could represent taking a chance or taking risks as we already know, a great combination!

A skull or crossbones might be added to represent danger or again, risk. Or a rose could be included to represent love or beauty. You can emphasize on thorns to show that love can also be risky and dangerous.

Flames, as well as other elements such as lightning bolts, may be used to symbolize passion or power. Diamonds and other gemstones are also frequently chosen since they represent prosperity and success. Knives and chains are also popular choices because they signify danger and violence.

In the end, it’s up to you and your preferences what other symbols you want to include in your eight ball tattoo. It’s a great way to make the design more personal and unique.

Gamble related symbols are also common in eight ball tattoos. This is because the eight ball comes from a pool game, so no wonder other gambling elements fit so well next to it.

There are a few different ways that the eight ball can be designed as a tattoo. One way is to have it inlaid into a gambling or casino-themed design, such as a slot machine.

Slot symbols usually include cherries, lucky sevens, and dollar signs. Lucky sevens are a popular choice for eight ball tattoos, as they are traditionally considered to be a lucky number since they indicate a jackpot.

Why is My Tattoo Shiny?

Card suits are a popular choice among gamblers and are often included in an eight ball tattoo design. The four suits (spades, clubs, hearts and diamonds) can represent various things. You don’t have to add entire cards to your design, as you can add card suits symbols separately. But nothing stops you from adding individual cards, as they hold their own meanings as well.

For example, the ace of spades is the highest card in the deck and is often associated with good luck. It can also represent power, strength, and courage. Queen of hearts tattoos are often believed to represent love, while the king of clubs can represent success. Joker on other hand is considered as the wild card which can represent change, chaos, and unpredictability.

Dices are another gambling symbol often included in an eight ball tattoo. They represent the chances of winning or losing in a gambling game. 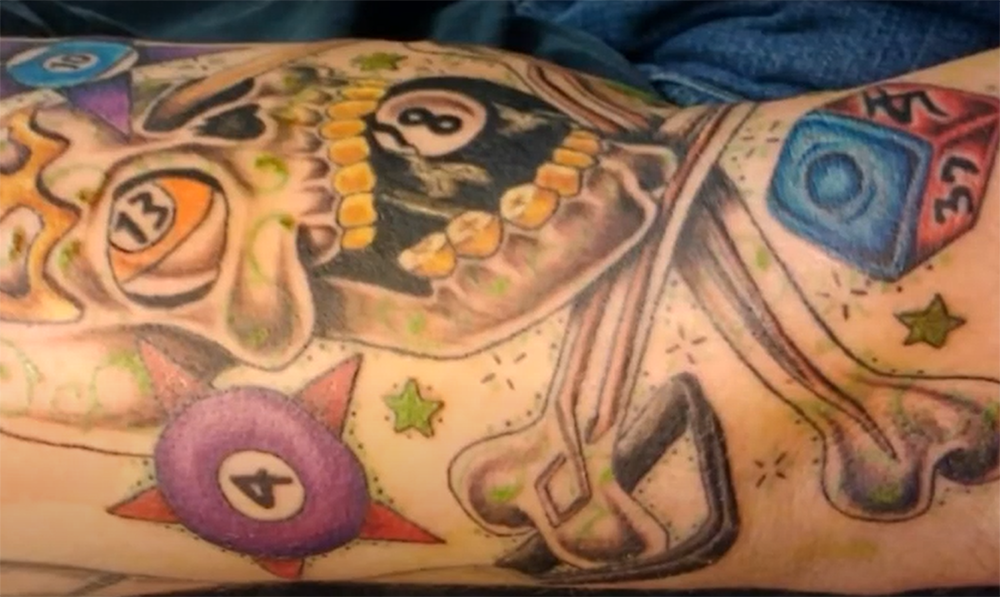 The most common dice used in gambling are six-sided dice, also known as “cubes.” They are used in a variety of gambling games, including craps, board games, and role-playing games.

What does a black 8 ball represent?

A black eight ball tattoo can have different meanings for different people. It could be a reminder to stay positive through tough times or it could represent taking risks in life. For some, it’s a lucky charm and for others, it’s a way to show their love of the pool. No matter what the meaning is, this type of tattoo is sure to make a statement.

The answer to this question is a little complicated. While some people see the number eight as being incredibly lucky, others view it as being the complete opposite. It really depends on your personal beliefs and interpretation.

On the other hand, some people believe that eight balls are actually quite unlucky. This is because they are linked to gambling and in gambling, things don’t always go the way you want them to.

What does a flaming 8 ball tattoo Mean?

The most popular meaning of a flaming eight ball tattoo is that it symbolizes good luck. This is because the number eight is considered to be a lucky number in many cultures around the world. In addition, the flames represent the passion and excitement that comes with taking risks and pursuing your dreams.

Another common meaning of a flaming eight ball tattoo is that it represents rebellion and nonconformity. This is because the eight ball is often associated with pool, which is traditionally seen as a game for rebels. Therefore, getting a tattoo of a flaming eight ball can show that you’re someone who isn’t afraid to break the rules and forge your own path in life.

Finally, some people get a flaming eight ball tattoo simply because they think it looks cool. And it’s hard to disagree with that!

Useful Video: The meaning of an 8 number tattoo – Facts and photos for tattoovalue.net

So, what does an 8 ball tattoo symbolize? There are many different interpretations to this question. Some people see it as a representation of good luck, power and success. For others, it is seen as a signifier of risk. And for some people, it’s simply a cool tattoo design that looks rad. No matter what meaning you ascribe to the 8 ball tattoo, it is undoubtedly a powerful and eye-catching image that will make a statement about you as an individual.

In short, there are endless possibilities when it comes to eight ball tattoo meanings. Even the individual elements will differ in meanings from individual to individual as tattoos are incredibly personal.

What Happens If You Use Scented Soap On a Tattoo? 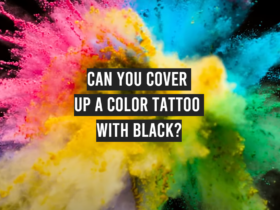 Can You Cover Up a Color Tattoo With Black? 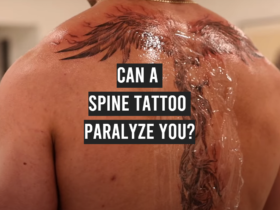 Can a Spine Tattoo Paralyze You? 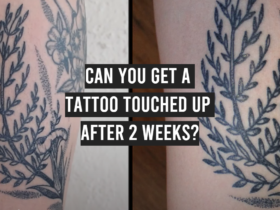 Can You Get a Tattoo Touched Up After 2 Weeks? 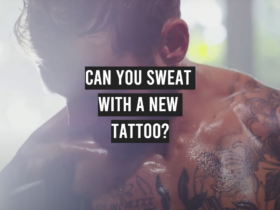 Can You Sweat With a New Tattoo?